Telling Stories: Ashima and the A1 | Profoto (IN) Skip to main content

Telling Stories: Ashima and the A1

Acclaimed photojournalist Ashima Narain takes the A1 to Orissa to tell the story of water and sanitation in the region.

Telling stories is what photography is about. And there are few photojournalists in India who are better qualified than Ashima Narain to narrate the woes, tribulation and celebration of the common people through her lenses. We get to know a little more about Ashima, her works, and her aspirations in this story.

Q: How did you get started in your photography journey?

A: It was a long time ago! I have been working professionally for almost 20 years now. I was very fortunate to get my first paid photography job with a newly launched magazine in 2000, called Man’s World. It was a brilliant opportunity because as a novice, I was sent to shoot such a diverse range of subjects, from celebrity portraits, fashion to sports coverage, food, watches and even toilet paper. It made me understand that whatever your subject is, you have to find a way to engage with it and generate interest for the viewer.

Q: What kind of stories do you wish for your photos to tell the audience?

A: My first hope is always for myself – and through the exploration of that one hopes that it filters through to various audiences.

I hope to make stories that allow me to broaden my understanding of the world, that people live under so many different circumstances, so views and motivations differ, and this requires acceptance, and often advocacy for those who are unable to represent themselves due to extreme socio – economic or even political oppression.

Q: Can you share a bit of background behind the subjects in this series of photos?

These stories were all shot in Orissa for the NGO WaterAid India, who are looking at how to improve the design of toilets for people who have physical challenges using the current models. This also included pregnant women, who find it very difficult to squat during the later stages of pregnancy.

The first image is of Ranglata (above), whose daughter in law is 8 months pregnant. They have a toilet, but no water connection close by, so it is up to this frail, old lady to carry up to forty buckets of water a day from the public hand pump to their home so that her family of four can use water to cook, clean, bathe and flush.

I was shooting her pumping the water, and as she finished, she put down her bucket, sighed and covered her face to wipe all the sweat off due to the hot mid day sun. This is when I shot this picture, as I felt it represented her fatigue from carrying such heavy loads.

The second image (above) is of 19 year-old Bapun Barik, who has never been able to walk or talk. His parents travelled to as many places as they could afford to in order to find a treatment for him, and they finally gave up 2 years ago.

As part of a government disability scheme, Bapun was given a wheelchair, on which he can push himself back and forth slowly, but the paths need to be smooth.

The family does have a toilet, but to access it you walk through a narrow passage between two huts, then crouch through a low ceiling kitchen, then continue down an uneven and muddy path past the cows to reach the toilet. Now imagine doing this on a wheelchair. It is not possible, and Bapun’s family members have to carry him through the kitchen to the toilet. Here, they put him down on his hands and knees on the toilet floor so he can use it. To be carried out, then to wash his hands and knees is difficult and therefore often neglected.

For this portrait, I wanted to show him alone as I felt that even though there are so many people around to constantly help him and speak for him, I wanted to share the fortitude that I felt he had. I also wanted to ensure he was highlighted amongst his surroundings, and felt that using a flash would be the best way to communicate his courage both creatively and technically. 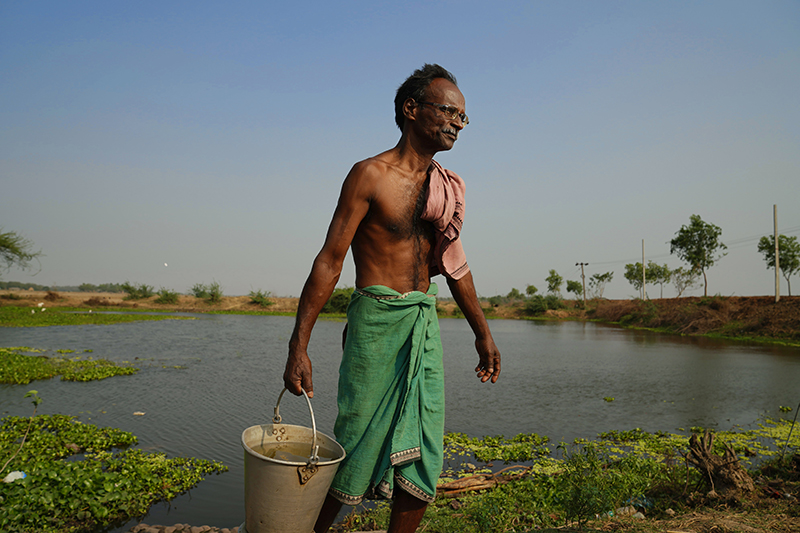 The third image above, is of Kirtan Mahalik, who has to look after his brother, who has been blind all his life.

Under a disability scheme, a toilet was made in their family home, but there was no ceiling, and the family had to spend their own money on an aluminum sheet for roofing.

Their house has no direct water supply, so Kirtan goes to fetch water from the pond that is 100m from his house to use for washing clothes, utensils and the toilet.

Here, I again used the off camera flash to shoot as he collected water and then turned to walk home with it. In the afternoon sun, the flash helped to highlight Kirtan and show his strength through his lean frame.

Q: How has the Profoto A1 benefited your work?

A: As a photographer who works in parts of India where people lack infrastructure, it is very important to work with less but effective equipment. As I was going to shoot a sanitation story on families that have to cope with a lot of adversities just to for something as basic as going to the toilet, I wanted to think of a way that would visually highlight their endurance and portray them with dignity.

I use flash in my portraiture, but less so when I am in ‘village journalist’ mode. I don’t travel with assistants, so I knew I needed to carry something versatile, portable and easy to use, as I would have to hand the flash over to someone to hold – and even though I would show them where to point it – more often than not I would look over and it would be facing the ground or the sky… The A1 was light and easy to use, so I was able to make some images that I feel helped to convey the strength and the suffering of my subjects.

Q: Which photographers’ works have inspired you?

A: Lots – from different genres – when I started to think about photography, the photographer who I always tried to follow (before the Internet and social media), so through books and magazines was Nick Knight. Then when I started to do some celebrity portraiture, Annie Leibovitz was / is hugely inspiring. Now as a photojournalist, there are so many – Ami Vitale for her emotional images, Lynsey Addario for her courage, Prashanth Vishwanathan for his ability to understand the diversity of India. There are so many so constantly inspire me in different ways.

Q: Being a female photojournalist, what are some of the challenges that you think you face?

A: Honestly, at 43, I think the current challenge for me, is not so much of being of being female, but of being a parent to 3 young children who need you, and finding a way to balance their needs with mine. For me, photography is not just a career, it is a need, I need it to help me process how I feel, I need it to help me slow down, to feel calm, to just maintain my sanity. But my needs take me away physically from my children, so I am conscious of my choices on what assignments I take - they have open up new sights, sounds, feelings and interests for me, else I don’t feel it is worth leaving my children for!

Q: In what ways do you feel that the current state of photography (globally, or locally in India), can be improved?

A: I think the work being produced currently is amazing – boundaries are being pushed every which way.

Perhaps it is not so much the state of photography itself that needs improvement but the conversations around it, and the dissemination of it in a meaningful way needs   improvement. But these are long and perhaps slightly tangential conversations to have – for another time?

Ashima is a photographer and filmmaker, represented by National Geographic Image Collection, and the former photo editor for National Geographic Traveller India and Time Out, India. In March 2017, time.com listed her as one of 34 women photographers from around the world to follow. In August 2017, she was part of 19 photographers from 15 countries chosen to create imagery for Disney Worldwide Service’s Dream Big Princess campaign, to raise $1million for the United Nations Foundation’s Girl Up leadership programme.

She lives in Mumbai with her husband and 3 children.